In the early 1990s, scientists at Johns Hopkins University School of Medicine identified glucoraphanin as a naturally occurring compound in broccoli that, when converted to sulforaphane, possessed antioxidant activity and appeared to be responsible for the epidemiological findings that diets rich in cruciferous vegetables were correlated with lower incidence of chronic health issues.

Later, this same group of researchers demonstrated that the glucoraphanin content of mature broccoli was highly variable. Further, there was no way for consumers to detect this variability. However, glucoraphanin was present at much higher concentrations in broccoli seeds and 3-day-old broccoli sprouts.

TrueBroc® branded glucoraphanin from broccoli seeds was developed to provide consumers with a consistent and concentrated source of glucoraphanin.


Since 1992, glucoraphanin and its bio-active form sulforaphane have been extensively studied at Johns Hopkins and other medical institutions around the world. More than 1,700 studies have been published which support the possible health

benefits of these compounds. Brassica has recently adopted broccoli through the Adopt-an-Herb program with the nonprofit American Botanical Council (ABC). Through our adoption of broccoli, Brassica is helping ABC keep its unique HerbMedPro database up-to-date with the latest scientific and clinical research on broccoli and its nutrients.

FUN FACT: Did you know that 1 cup of raw broccoli, chopped, has only 31 calories and boasts more than 2 grams of protein and 15 milligrams of glucoraphanin? 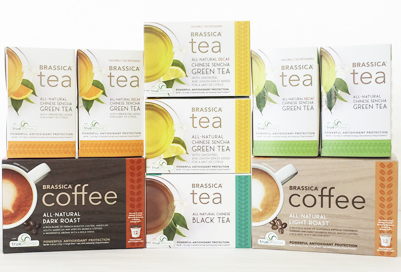 Visit our online store to purchase Brassica Tea and Coffee!