Most people know that consuming vegetables, especially cruciferous vegetables such as broccoli, is an essential part of a healthy diet. But what is it that makes these vegetables so healthy?

It is only within the past 20 years that scientists have been able to unlock the mechanisms and measure the value of specific phytonutrients within these plants. Specifically, understanding how they boost the body’s own protective systems such as combating oxidants and inflammation and protecting against damage caused by free radicals.

The important phytonutrient within broccoli that makes it so good for us is called glucoraphanin which, when consumed, converts to sulforaphane, an inducer of the body’s natural detoxification system 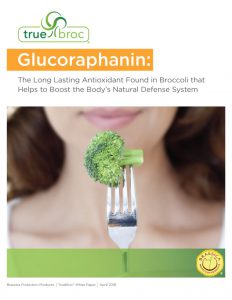 Read more about this super phytonutrient in our latest glucoraphanin 101 paper.

Myrosinase-like activity also occurs in our intestinal microflora so if glucoraphanin is consumed by itself, our gut microflora will convert a portion of it to sulforaphane. As in many types of metabolism modulated by the microbiome, this conversion rate varies from individual to individual.

Sulforaphane belongs to a group of compounds called isothiocyanates. In 1992, Dr. Paul Talalay, MD and colleagues at Johns Hopkins School of Medicine identified sulforaphane as the most potent natural inducer of Phase 2 detoxification enzymes. These enzymes eliminate many types of free radicals and environmental pollutants and trigger ongoing antioxidant action that lasts for up to three days. These compounds and their mechanisms have been studied extensively and are supported by more than 1,700 scientific publications.

The Importance Of Cellular Protection

The human body has an impressive set of overlapping systems of detoxifying enzymes that protect the body from both extrinsic and intrinsic assaults. These same Johns Hopkins’ scientists spent decades understanding the basic molecular systems that the body uses to protect itself from damage. They discovered that these detoxifying enzymes did not normally work at full capacity, but that natural components from cruciferous vegetables were able to boost the function of these protective processes to be more effective. They surveyed the fruit and vegetable kingdom and discovered that broccoli contained some of the highest levels of these compounds.

FUN FACT: Did you know that 1 cup of raw broccoli, chopped, has only 31 calories and boasts more than 2 grams of protein and 15 milligrams of glucoraphanin?

Visit our online store to purchase Brassica Tea and Coffee!